Are you familiar with the market for second hand skis and snowboards in Japan?

Founded in the village of Hakuba, Nagano prefecture, where the 1998 Winter Olympics were held, Monster Cliff Co Ltd. specializes in purchasing used skis and snowboards from all around Japan.

Send us photographs of your gear and our system will provide you with quotations, allowing the sale and shipping process to be completed entirely online.
Since our founding in 2012, we have purchased more than 10,000 pieces of gear annually, and that number continues to rise with every passing year. In Japan, it is mandatory for businesses involved in the purchase of second hand items to be licensed.

In Asia, including Japan, the ratio of young people involved in competitive snowboarding is especially high. Consequently, people tend to let go of their gear relatively quickly due to changes in their lifestyle. There are also many skiing locations that have shut down. As a result of these two factors, there is a lot of gear in the second hand market.

If you are dealing with CtoC transactions between private individuals, it is difficult to sell your gear at an appropriate market price during the summer season. Our company can help with this, as we purchase gear at appropriate prices throughout the year via our online service, thereby helping to find the next buyer for your gear.

There is a high possibility that more and more people are considering investing in affordable second hand gear as a result of rising material prices and inflation causing the prices of new gear to remain high year on year. 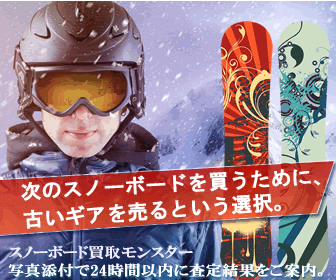